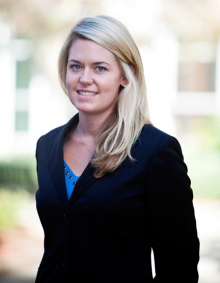 One and a half million neonatal deaths worldwide due to infection, with many beginning as umbilical cord infections; 277,376 neonatal deaths alone attributed to tetanus in 1997 according to the World Health Organization; and $100,000 granted by the Bill and Melinda Gates Foundation Grand Challenges Exploration for UF student Margo Klar to find one simple solution to a big problem.

Tetanus disease, caused by clostridium tetani bacteria infection, is just one of many problems that can occur when an infant’s umbilical cord is cut improperly and it is particularly an issue in developing countries. Using a rusty scalpel, placing the umbilical cord on an unsanitary table or using an old razor blade to cut the cord can all lead to umbilical cord infections in babies, said Klar, a doctoral student in UF’s department of epidemiology in the College of Public Health and Health Professions and the College of Medicine.

Neonatal tetanus is the second leading cause of death from vaccine-preventable diseases among children worldwide, according to the WHO.

To address the problem, Klar came up with the idea of creating a simple ceramic cutting device, called Ceramic Umbilical Cord Finger Scissors, and applied for a grant.

“My device makes use of materials that do not rust and are proposed to stay sharper longer and over repetitive use when compared to stainless steel,” said Klar, who has a bachelor’s degree in chemical engineering and a master’s degree in public health from Yale University.

It all started when one of Klar’s Yale professors encouraged her to look at the Gates Foundation’s Grand Challenges in Global Health website. One of the foundation’s top priorities is creating new technologies to improve the health of mothers and newborns.

Currently, Clean Hygiene Kits that include a disposable scalpel are being distributed to developing countries. But in environments where resources are scarce, disposable scalpels are sometimes reused. Klar knew her device needed to be affordable, stay sharp and be easily cleaned, even after multiple uses. She came up with a vision for a ceramic cutting device and was among approximately 5,000 people to apply for a Gates Foundation grant in November 2010. Her proposal was one of 89 that received the Grand Challenges Explorations Grant Round 6.

“The Gates Foundation looks at this as an opportunity to get a lot of good ideas moving in a positive direction,” she said.

Klar decided UF was the best place to pursue her grant work and her Ph.D.

“I chose to bring my grant to UF because of the interdisciplinary environment it provides,” she said.

Creating this device involves many different fields working together. Klar works in engineering and arts and architecture, and she conducts experiments with bacteria, emerging pathogens and meat sciences.

With a background in chemical engineering, emergency medical sciences, biology and public health, this project brought together different parts of her education. She believes the success of this device is all about tackling the small challenges. She pitched the device with a specific shape and look in mind, but she said it is important to be open to new designs and materials.

“It’s not about the device, but it’s (about its) impact,” Klar said.

And she is excited to take on the challenge.

“It’s exciting being able to come up with a new technology that could potentially have a huge impact on the outcomes of babies in developing countries,” she said.

Klar is the first student at the university to receive a Gates Foundation grant and the department is very proud of her, said Linda Cottler, Ph.D., M.P.H., chair of the department of epidemiology.

“Margo is a very innovative thinker, and she pursues her ideas, which is how she got funded in the first place,” Cottler said.